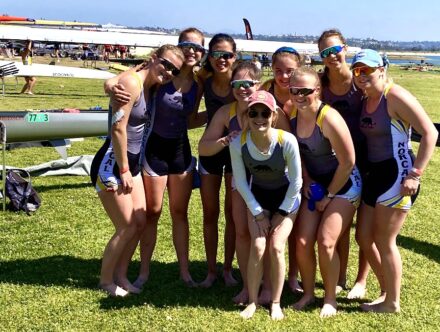 Norcal Crew is a 501(c)3 nonprofit organization dedicated to the development of youth through the sport of rowing. The organization is overseen by a board of directors, managed by an executive director and coaching staff, and supported by its membership and the surrounding community.

The Mission of Norcal Crew is to create success by providing high-level training for student athletes across the San Francisco Peninsula.  Norcal provides a comprehensive training program to strengthen student-athletes’ personal development and athleticism.  Norcal strives to develop athletes into national champions.  Norcal began in 2000 and has been creating faster boats every season. In 2022 we won two national championships.

Norcal believes that all athletes deserve to row, regardless of their ability to cover the costs.  Norcal is committed to making the opportunity to row available to any athletes who want to train.

Norcal practices in two locations, Bair Island Aquatic Center (BIAC) and Westpoint Harbor (both located on the water in the Port of Redwood City), and races all over the country, though primarily in California. Norcal has top-of-the-line racing shells, including eights, fours, quads, doubles, pairs, and singles.

Crew is a team sport. It fosters a sense of team spirit, helping athletes develop both physical and mental toughness. It broaden their horizons as they learn to trust and support others, while establishing their own sense of confidence and commitment. Those who stay with the sport generally remember it as a highlight in their lives. Crew is a lifelong sport with participants who row well into their seventies at masters regattas held throughout the country. In the fall of 2000, Norcal’s original head coach, Mike Still, founded Silicon Valley Crew, a rowing program for high school students on the Peninsula. The program had one hand-me-down shell and only a handful of girls and rowed out of the Marine Science Institute. Due to the small size of the program, Mike often rowed in the boat with the girls so they wouldn’t go in circles. At the team’s first race, only six girls showed up, so Mike even raced with the team (and they won!). In their second year, the program graduated to rowing out of a portable classroom in the parking lot and nearly doubled in size. Fun fact: Allison Frykman, a former director of Norcal, was a member of Silicon Valley Crew’s varsity four – the first crew to win a medal for the team at championships (pictured to the left). One year later, Ally Bocchieri, a member at Bair Island Aquatic Center, located just down the road from Silicon Valley Crew, started a junior level rowing program to compliment BIAC’s Masters rowing team. Because they were located so close to one another geographically, the two junior crews competed for athletes and water space, diminishing the competitive potential of each program.

In the fall of 2004, the crews decided to combine their resources and athletes, merging into one team rowing out of the Bair Island Aquatic Center. The athletes chose to name the new program Norcal Crew. The program has grown steadily over the past decade and now has nearly 200 members across the men’s and women’s teams.